The subject is more actor than anything, playing a character in an imaginary time and place. 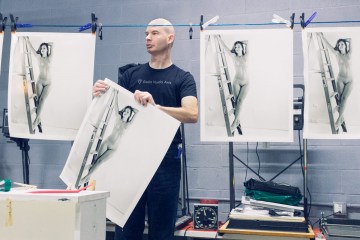 A. K. Nicholas is a visual artist whose photography mixes theatrical scenes with a painterly approach to celebrate the female form. His vision is broader than one technique, rooted in training that included painting, sculpture, and theater design.

Each of A. K.’s concepts includes a choice of person, activity, location, and mood. The core element can be a lively pose, a visual curiosity, or simply the beauty of nature. Motivation for his images can be, among other things, a spirited swimmer, a sultry pose in the shadows, or exploring a gritty industrial environment.

A. K.’s themes use varying degrees of aesthetic impact to celebrate the feminine form. Some motifs present straightforward pin-up art while others are more contemplative and employ abstract elements of pattern, geometry, and texture. A. K. is committed to sound artistic fundamentals—to go beyond a collection of bodily forms or a catalog of beauty. This blend of painstaking compositional discipline with sensual subject matter is a cornerstone of A. K.’s creative process. The bottom line is the emotional effect on the viewer. 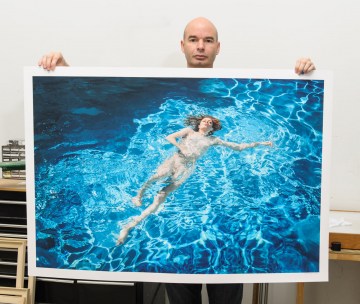 The legacy of pin-up is present in almost every image A. K. makes. The message takes on various degrees of directness, with the figure central to the composition. Although A. K.'s approach is far from traditional, the pin-up genre has influenced artists and subjects for generations. A. K.’s collaborators are fully invested in playful performances, in contrast to vintage voyeuristic pin-up themes.

A. K.’s works include both studio and improvised locations. In studio nudes, typically one central figure is presented in an expanse of empty space. They are free of distraction, inspired by the sparse indoor compositions of classic academic nude photography. These presentations have the advantage of meticulous lighting and deliberate technique. The lighting creates shapes around the subjects to set the mood for each image. Some are bright and airy while others are shadowy and mysterious. 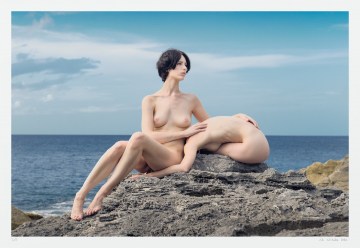 In the canon of human beauty, there is an array of features and body types. A. K.’s photography is selected from a narrow band of that spectrum, based on his perspective. He neither creates nor documents elegance, but pays homage to it. A. K. builds fictional narratives through collaboration, gravitating toward gymnasts and other athletes, or tomboys for their unrehearsed expressiveness compared to commercial models. Photographer and subjects improvise, accumulating images for selection later. There is the occasional interaction between two or more figures or the interplay of props, but most of the images are of an individual figure, communicating a mindset in terms of pose and attitude.